Sim racing is, as you know, very much like real driving except there’s less real-world information for a driver to base their decisions on. The physics in the modeled environment compared to the real world are fundamentally based on the same rules, but the way the forces happening in that environment are communicated is different if they’re communicated at all.

In a real car, you feel every detail: tire under rotation while braking (or, the threshold), brake lockups (especially at the front) through your pedals, and understeer through the steering wheel. Rotation of the car into corners and motion at the rear is felt through your body, and the quick reflexes you need to catch an oversteer moment are usually triggered by sensations through your bottom! Part of the procedure when first leaving the pits is to create moments of slip (induce understeer, oversteer, a small brake lock) so you can gather information quickly about the car’s behavior and overall grip levels on the track.

I’ve always felt that in a simulated environment you have to be more cautious and finer with your inputs and gradually find that limit of grip. As a real-world driver, I put this cautiousness down to simply not having the information I require to feel quite as confident and as quickly as I would on track. That’s why all sim racers are keenly interested in anything that can give them more information about the car’s, grip, movement, and environment. Enter the world of haptics.

Haptics, in simple terms, is “the science of transmitting and understanding information through the sense of touch”. Haptics is literally designed, through an awful lot of cool science, to convey information via the body’s somatosensory system.

Haptics give subtle cues as to the state of the car at that moment in much the same way a real car would give a driver while on a real circuit.

What’s in a haptic system?

A haptic system is driven by hardware – a set of actuators to provide the motion, an “ACM” (Actuator Control Module), a communication module:

Actuator: an assembly of motor and mechanic providing movements and vibrations.

Actuator Control Module (ACM): provides power and control to the actuators. Controls the power sent to the motor and adjusts the precise rotation according to the feedback from an encoder within the actuator.

Communication Module: electronic component used to transmit haptic code, converting a signal format to another one.

This kit list is in fact the D-BOX 4250i G3 Haptic System, a 4 actuator, FIA Approved system from D-Box.

There is of course a software side to a haptic system, too. D-BOX “haptic code” is integrated directly into the simulator software engine, which they call “direct motion code integration”. This means that the motion code is derived directly from the simulator rather than via the simulator’s audio output. There’s a huge amount of tuning potential in these systems – check out this video with Anthony Alfredo who takes you on a walkthrough of the D-Box game center:

D-BOX Technologies haptic motion systems are partnering with SIMTAG to develop a new haptic pedal set. Based on the announcement, something that really caught my eye is the way the system highlights the evolution of the car, allowing for brake evolution and changes in behavior as the race goes on such as ABS and other wear is extremely compelling.

Not a huge amount at SRC HQ is currently known about price and availability but I would gather that the unit is fully Game Center / Motion Code compatible and it may be possible to retrofit an existing set of Simtag pedals.

Haptic vs Vibration and why these things are not the same

Different budget levels get different levels of feedback and there are several additions you can make to your sim rig that will enhance the feedback you feel while driving. I myself am a fan of the SIMHUB powered Sim3D rumble kit and while each addition I’ve tested makes for a valuable additional source of information, there’s a big difference between a Rumble kit with motors or a Buttkicker system.

Rumble Kits, ButtKickers, and vibrating seat cushions use audio waveforms to create the feedback. There’s a limited dynamic range for these devices which makes conveying detail in a way that would immediately make sense to a racing driver very difficult.

Vibration isn’t information; which is the key difference between haptics and rumble kits. With vibration, you have to learn to interpret the signals, rather than immediately recognizing them as a real-world feedback experience. It’s just not the real thing. These systems can lag too; which means you’re waiting for information that doesn’t arrive quickly enough to be able to respond.

What matters in haptic feedback?

When you’re summing up the key differences with a haptic system, it really boils down to the immediacy of the effect, the dynamic range upon which the information is conveyed, and well thought out software interpretation of the simulated car’s motion.

This is simply beyond the scope of a vibration system:

Is Haptic the future for sim racing?

Yes, I think it is. Sim racing has a long future ahead of it and in that future, I see technologies like those from D-BOX and SIMTag becoming more and more prolific. The barrier right now, I think is price, availability, and an understanding from the community about why haptic technology is a better and far more intelligent approach to simulated driving feedback. Like the creation of force feedback before it, I think we’ll see haptics become just as standard in a sim racing cockpit as a wheelbase and pedals!

2 thoughts on “What is Haptic Feedback in Sim Racing?” 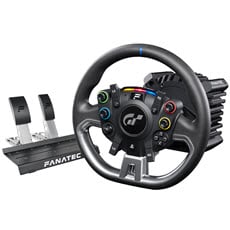 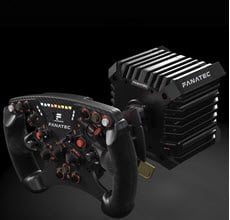 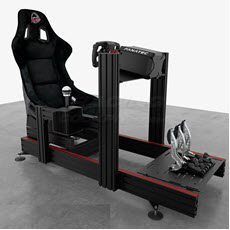